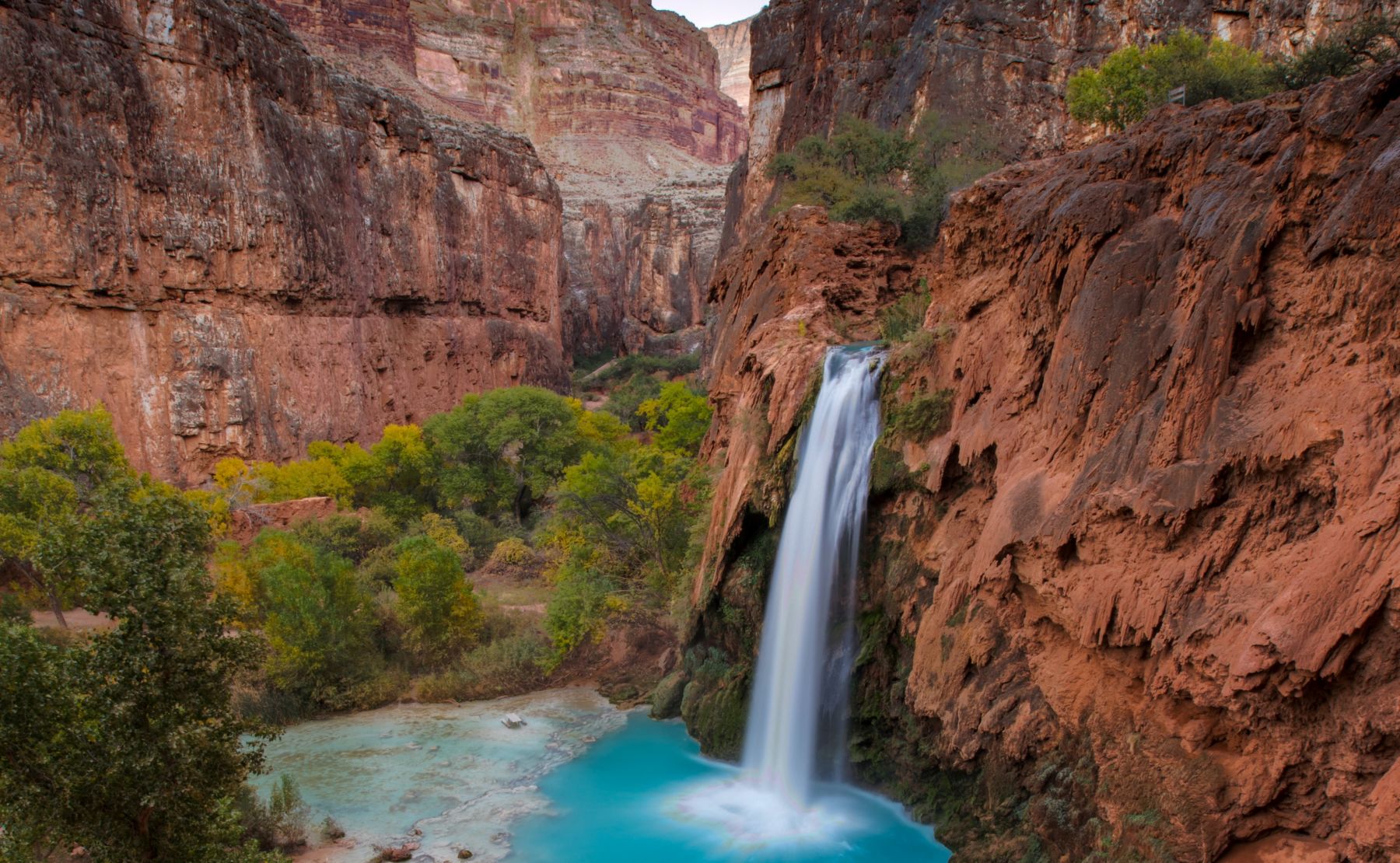 Havasu Falls might be the most famous secret spot on Earth. Within the desert of Arizona at the bottom of the Grand Canyon, Havasu Creek flows into the Colorado River. Though the location is well know, a first hand experience of its blue-green water splashing over travertine cascades and falls requires effort and planning.

The main way to see Havasu Falls is to hike 10 miles into the canyon. It is possible to reach the falls from a rafting trip on the Colorado River or helicopter to the Village of Supai (there are no roads to the village) and then hike 2 miles to Havasu Falls. (Please note that Lake Havasu is a totally separate place 150 miles south of here on the border of California and Arizona.)

The Creek and the Blue-Green Water

Havasu Creek is the second largest tributary after the Little Colorado River withing Grand Canyon National Park. During the summer the water is in the low 70’s but it drops to the 50’s during the winter.

A common question is: What makes Havasu Creek water so blue? The contrast to the surrounding desert environment makes the already vibrant color that much more striking. Essentially, magnesium and calcium are absorbed into the water from the rock formations. From there, calcium carbonate is formed. These minerals in the water reflect the sun, creating the electric blue color. This same process takes place in the Little Colorado River.

As a side note, as the water evaporates on the surface it leaves behind travertine, also made of calcium carbonate. Travertine makes the uniquely shaped pools and waterfalls of Havasu Creek. UC Davis has a wonderful article diving into the chemistry of the Havasu water color.

Havasu Creek flows through Havasupai Tribal lands on its way to the Colorado River. Most people visit Havasu Creek on tribal land.

Historically the Havasupai would winter up on the rim and only live in the canyon during the summer when there was enough sun to grow crops. If you want to learn more about the Havasupai people check out the book “I Am the Grand Canyon: The Story of the Havasupai People.”

Most people hike into the canyon on the Havasupai Trail (It is possible to helicopter or hike up from a Colorado River rafting trip). The initial hiking destination is Supai Village an eight-mile descent. There is no way to drive into the canyon or to the village.

Over the first two miles the trail drops more than 1,000 feet in elevation. The trail gets steadier after this. However, expect essentially no shade and be prepared for tons of sun exposure. Ample snacks, water, and prior physical training lead to a more enjoyable hike.

Supai Village contains the rustic Havasupai Lodge. While being pricey, the lodge offers the best accommodations in the canyon. The other option is to stay at the campground another 2 miles into the canyon at Havasu Falls.

Hiking within the Canyon

Hiking between waterfalls requires multiple stream crossings. Expect your feet to continually get wet. The creek water is not good for drinking due to the mineral content so carry an ample amount of water. Be aware there are rattlesnakes within the canyon as well as ticks. Keep an eye out for ravens, they routinely grab peoples bright shiny objects and food. At times they unzip backpacks to steal possessions as well.

Those wanting a second big adventure can make the trek all the way down the canyon 11 miles from Supai Village to the Colorado River. Most rafters stop hiking well below Beaver Falls since the Havasupai charge people to come up any higher. Below Beaver falls until a mile or so above the Colorado River there are few people. However, just above the confluence thee pools are routinely packed with people.

Flash floods are common during monsoon season in Grand Canyon. Monsoons take place most often between mid-June until late August. People have lost their lives due to rock falls as well as being swept downstream as the creek can rise quickly.

The video above shows common flash flooding due to monsoon rains. The flooding can be much more significant and come up quickly. The general rule is don’t cross the creek during a flash flood. Instead wait for the river to drop or stay on the one side.

The two mile hike downstream from Supai Village takes adventurers past Fifty-Foot and Lower Navajo Falls before arriving at Havasu Falls. The most well-known waterfall in Havasu Canyon, Havasu Falls drops 100 feet into a pool surrounded by Cottonwood trees and picturesque campsites.

A mile past Havasu Falls sits Mooney Falls. While less well known Mooney falls twice as far as Havasu, an impressive 200ft into its pool. The hike to the bottom of the falls is an adventure in itself. There are tunnels, chains and ladders used to follow an old mining route. The falls is named after a prospector William Mooney who fell to his death here.

Further downstream, lies Beaver Falls. Much shorter in comparison to the others mentioned, but more cascading and in some ways more full of grandeur. The trail to Beaver Falls is about six miles from Supai Village and much more remote than those to Havasu & Mooney Falls. However, flooding can affect these falls: diminishing some, and creating others.

There are three ways to access Havasu Creek: a helicopter ride from Hualapai Hilltop, cruising in on a raft, or simply by putting one foot in front of the other. The trailhead down to Havasu Falls begins at Hualapai Hilltop, about a 45-minute drive, North-East of Peach Springs, AZ. This is where you will park your car and begin your descent! Parking is free here and many people opt to sleep in their cars the night prior their trip, to get as early a start as possible in the morning. The closest airports are in Flagstaff, Arizona and Las Vegas, Nevada.

Historically there has been a helicopter that takes people from the rim to Supai Village and back. Prior to the pandemic the cost was $85 one-way. However, it is unknown if and when the helicopter will come back online.

Getting a Havasu Falls Permit

Havasu Creek is a surreal place to spend a holiday. However, don’t pack your bags just yet: Your trip must start with an attempt to get a permit. Reservations for the Havasupai Campground open on February 1st, each year and can only be purchased through the Havasupai Reservations webpage. In years past, permits have completely sold out within the first 30 minutes of opening so be sure to have a login set-up beforehand and good luck!

Staying at the Havasupai Lodge is another option. This has an estimated room rate of $440 per night for a four-person room. In addition, there is a $110 entrance / environmental fee per person. All taxes and permits are included in these costs.

Wildland Trekking, Pygmy Guides, & Four Seasons Guides all offer guided trips in to the canyon. These also book quickly so plan and contact them well in advance.

Hiking Up from the Colorado River

Commercial and private rafting trips on the Colorado River in Grand Canyon commonly stop at the mouth of Havasu Creek and then hike a ways up the canyon. Back in the 1990’s river runners could make it all the way to Mooney Falls and back if they hustled. Many groups would hike to Beaver Falls have lunch, play around and then hike back. Now, trips usually hike about 15 to 20 minutes to a fun swimming hole and some might head up a little farther.

The Havasupai have a ranger at Beaver Falls to charge an entrance fee (In 2017 it was $44 per river runner). This is the main reason people have stopped hiking up to Beaver Falls.

Havasu Creek is an all-around magical place. When visiting, there is the opportunity to unplug from social media, work emails, and online bank statements. One is truly granted the opportunity to cleanse their minds when they enter Havasu Creek. With that being said, remember that hikers are entering land that is not theirs.

No alcohol or drugs are permitted on the Havasupai Reservation. Yet, the vacation destination has gathered a party-centric reputation, from the approximate 20,000 visitors per year. Familiarize yourself with the tribal rules for visiting the Havasupai Reservation, as well as Leave No Trace standards to help keep the canyon as pristine as possible.

Thinking about a trip to the area, check out our post on the Grand Canyon South Rim and Christina’s the best attractions near Grand Canyon.